A couple years ago I constructed a graph of what percentage of my total tax expenditure went where, and I decided to do the same thing for 2009. My tax situation is a bit different now, as since my last chart I’ve had kids and I purchased a significant amount of land from my parents. This shows out of all the taxes that I keep track of, which agency gets how much of my total taxes. This includes taxes on income in 2009 (modified by refunds received in 2010 for the 2009 tax year), taxes on assets, and sales taxes that I kept track of. This does not include other taxes on expenditures like gas tax, cable tax, meals tax, or sales tax where I didn’t enter the sales tax amount as an itemized split into my finance program (since I’m not worried about tracking it that closely). I would have preferred a pie chart, as it’s more customary for this kind of thing, but it’s hard to show a negative percentage in there very well. Total appears to not be 100.00% due to rounding. 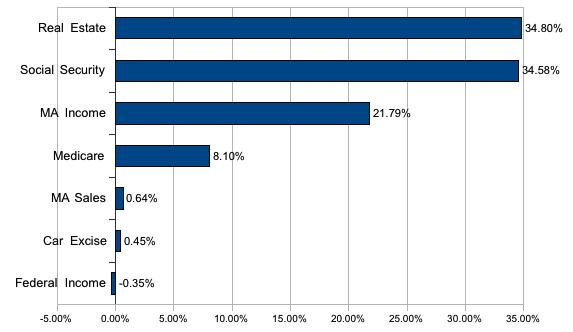