Today’s been my first day back at work since Peter was born. After 2½ weeks, he’s still not feeding well from the breast, and hasn’t been gaining weight. He’s still not back at his birth weight (which ideally happens by around 1 week). We’re working on feeding him a lot via bottles so that he can get some more calories in him. But that’s a lot more work, and we still have to take care of Hannah, too.

Yesterday, our lactation consultant said that it appears he has posterior tongue-tie, which could be a big contributing factor. (Other factors are just that not getting enough to eat quickly becomes self-reinforcing, as he doesn’t get the energy to have the next feeding and develops some jaundice.) So, we’re working with our doctor’s office today to get a referral to a specialist in tongue-tie recommended by our lactation consultant, based out of some hospital out in Concord.

So hopefully seeing this specialist and correcting the posterior tongue-tie will help get things back on track. Peter’s doing okay for now, as he does like bottle-feeding, but it’d be nice to have all the benefits of breastfeeding and make it easier on all of us for him to get up to the weight he should be at.

We do have an appointment with a lactation specialist on Monday, and I spent a good chunk of Friday calling between the doctor’s office and the insurance company to see if they’ll be covering part of the cost. We likely won’t find out before we go, however. But, the experience inspired me to do something I’d been thinking of doing for a while for situations such as these: hooking my computer up to record phone calls to companies.

My first thought was to dig up a modem from around the house and try to hook that up in such a way that the computer could record via it. But then my second thought was that since our phone service is VoIP (Vonage), it ought to be possible to just collect the digital data that’s already there and record calls that way.

Here’s what I did. I set up our switch (A small-business-grade PowerConnect 2716) to have two of its ports on a separate VLAN, so that they were disconnected from my “normal” internal network, and only connected to each other. Then, rather than the cable modem being plugged directly into the Vonage router (which serves as my home network router), it gets plugged into this separate two-port virtual switch, and the other port gets plugged into the Vonage router. Then, I set up port mirroring, so that all the traffic that goes to and from the router gets copied to another port. That port gets plugged into the spare network card on my computer. (That is, my computer has its normal network card for day-to-day use, and a separate network card that doesn’t even have an IP, it’s just there to listen to a copy of the traffic happening between the cable modem and the Vonage router.)

Now I have a method of sniffing my Internet network traffic. This may turn out to be even more useful when the kids grow up some and I want to add more Internet monitoring. But for right now, I just want something that captures the SIP packets that Vonage uses and assembles them into audio files for me. I discovered Oreka, which seems to do the job quite nicely. I just need to have the Oreka service running whenever I want to record a call, and it automatically puts the spare network card into sniffing mode and writes out WAV files for all calls that happen while it’s running.

All in all, it was much easier and works much better than I thought it would at first. I’ve looked up the wiretapping laws, and Google’s results say that Massachusetts is an “all-party consent” state, so I need to make sure to notify the other party when I’m recording a call. But I think my wife is actually looking forward to saying “This call is being recorded for quality assurance purposes.”

“CAUTION: These diapers, like almost any article of clothing including cloth diapers, will burn if exposed to flame. For your child’s safety, always keep the child away from any source of flame.”
— Warning on Walmart’s “Parent’s Choice” brand diaper boxes

The first week with Peter with us has been quite an adventure. I think that difficulty of raising children is multiplicative rather than additive. (That is, if one could quantify the effort in raising one child as 10, then the effort in raising two children is much closer to 100 than it is to 20.) Part of the trouble is that Peter hasn’t much wanted to drink milk straight from the source, so we’ve been feeding him pumped milk and formula, primarily with syringes and then bottles. He had lost more than the average amount of weight before starting to gain again on Wednesday night, and has had some Jaundice, so the doctors have been monitoring him on a regular basis. If all goes well, today will be the first day that he won’t visit a medical facility of some sort for checking bili levels and weight. (Although phrasing it that way makes it sound more ominous than it was. Things were going mostly okay, we just needed to monitor things to ensure that they started getting better rather than worse.)

But he’s been eating enough now, even if he prefers a bottle, and is a beautiful healthy boy. We may end up consulting with a lactation specialist to see about getting him to breast feed better, but last night he did fairly well, so maybe he’ll figure it all out on his own soon anyway.

But it’s been tough getting any sleep. It feels like Jessi and I have been running on all cylinders all day and night for the past week. I don’t know how Jessi will deal with the children by herself once I go back to work after Christmas, but maybe things will be less hectic by then.

Of course, everyone really just wants to see pictures: 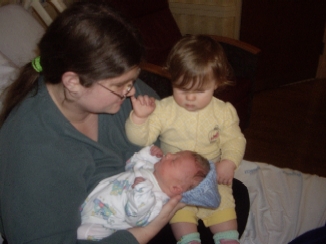 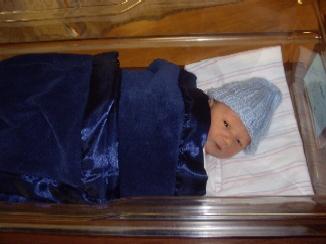 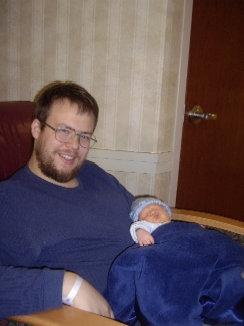 Peter, Mommy, Daddy, and big sister Hannah are all doing well, though Mommy and Daddy are rather tired.

The more I look into it, the less happy I am with really any of the candidates. I’m questioning my support of Brown over Robinson. But either of them would be better than the others. It’d be nice to have someone who I agreed with everything on, but then again, the only way I’d get that would be if I ran myself (which I won’t do). So, I need to figure out which principles I’m willing to compromise to try to get someone in office who I at least agree with somewhat.